Crossbows have come a long way over the last few years. The weapon that was once considered too large to lug around and too difficult to draw back for many people, is now to a point where you don’t think there can possibly be any more improvements. The silent draw system, new trigger, and speeds up to 470 fps are just a few of the reasons to give this new crossbow a try. But we wanted to get a closer look at why the Nitro XRT was one of the most talked about crossbows for 2019. Here’s our full, in-depth review of the 2019 Nitro XRT from TenPoint Crossbows:

The all-new T-5 trigger is probably the biggest improvement that TenPoint made to the new Nitro XRT. It has an ultra clean, crisp break and is ambidextrous so that both left-handed and right-handed shooters can use it with ease. Also, the trigger includes a new dry-fire inhibitor and auto-engaging safety. 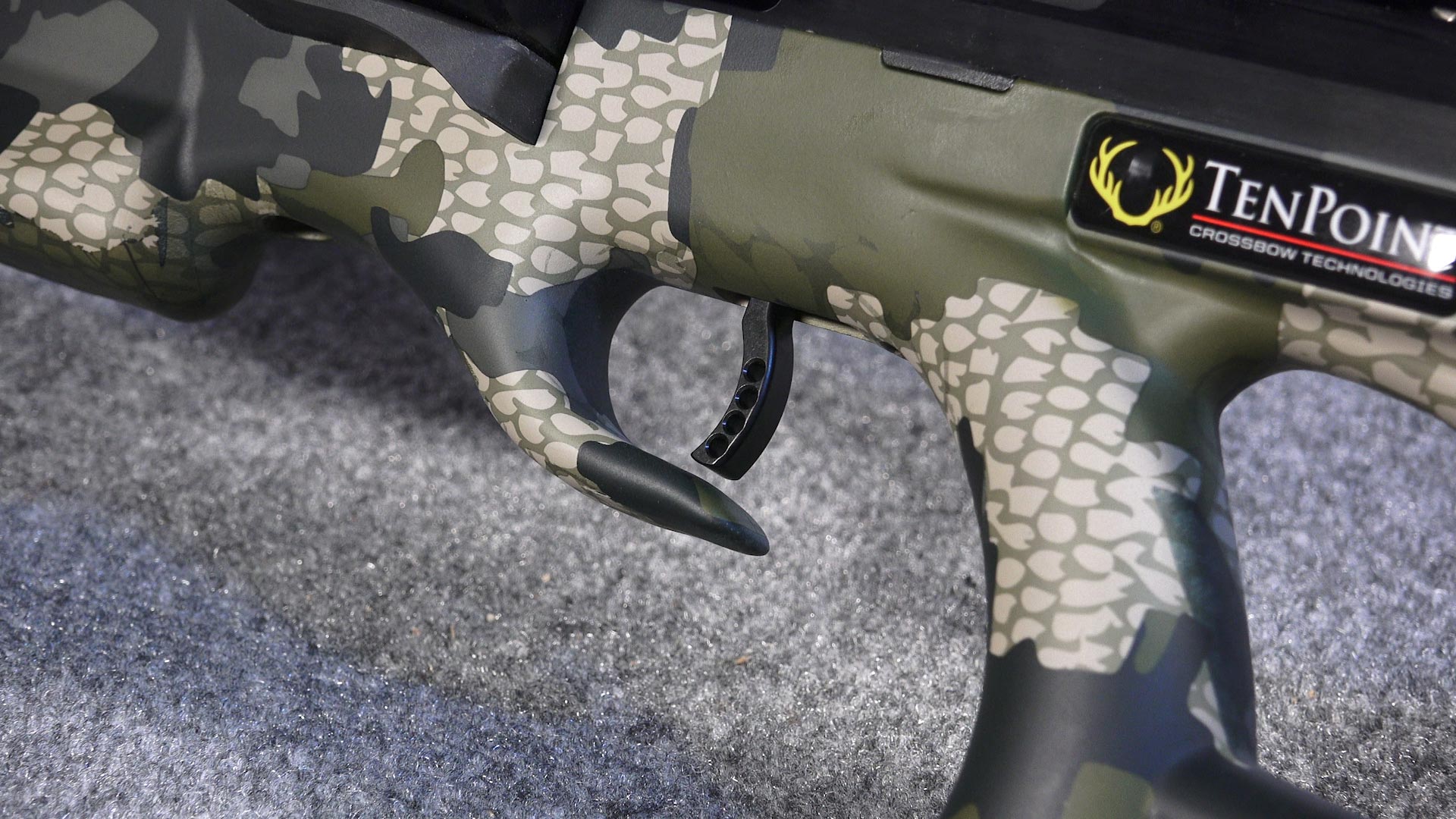 Included on arrows with any new TenPoint package is the brand new aluminum Alpha Nock. The design allows for better string to nock contact than the old Omni Nock. Having better string contact is very important with the Nitro XRT because of the severe string angle that the crossbow has. The Alpha Nock is compatible with all the new TenPoint crossbows, as well as any older model. This multi reticle scope is more adjustable than any other crossbow scope before it. When sighting in the crossbow, all you have to do is set the fps that you’re currently shooting and sight it in from there. If you plan on shooting with different arrows and different speeds, you can simply adjust the fps on the scope and the reticles will move once adjusted. You can also adjust the scope from 1.5-6x magnification. 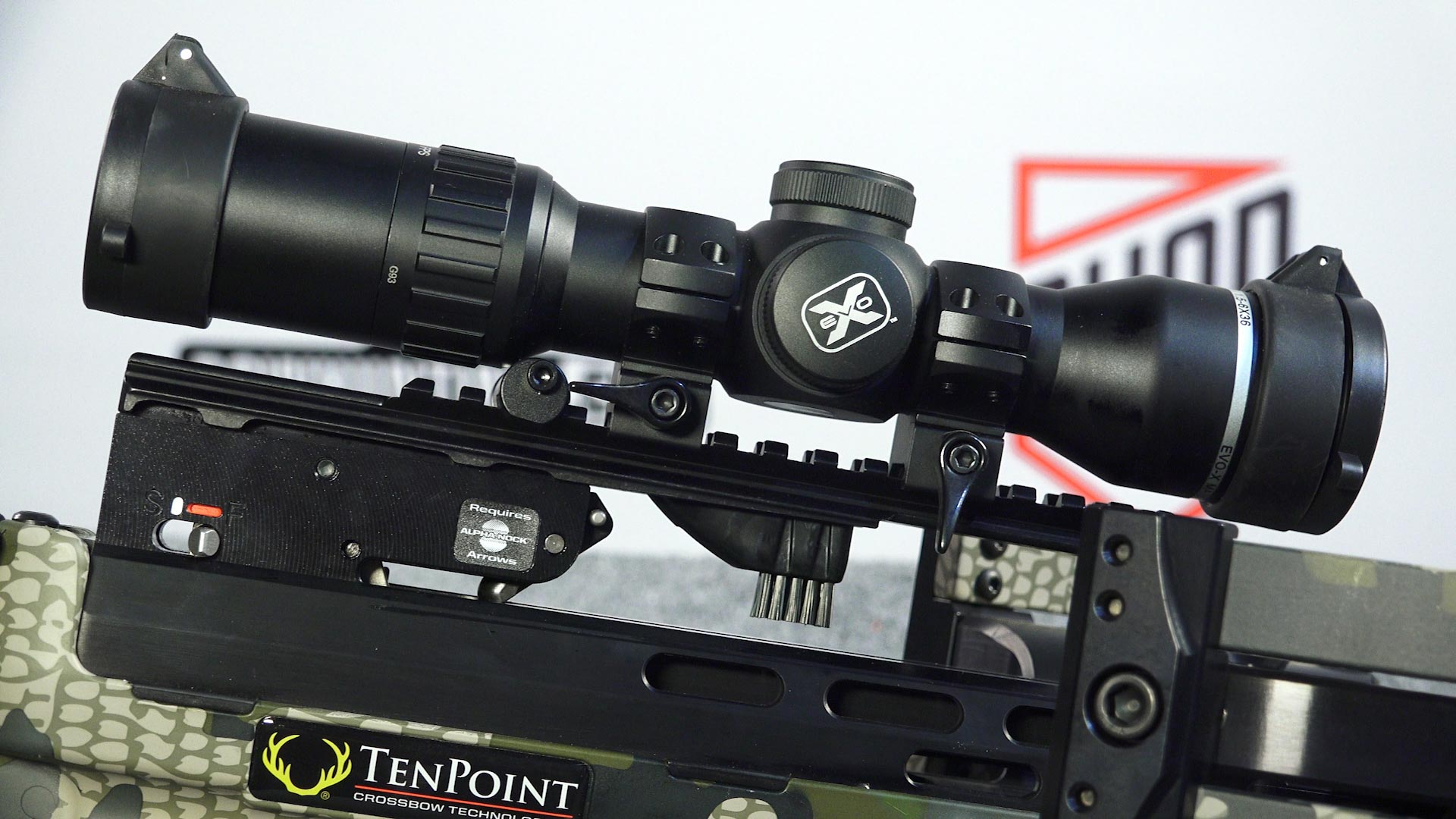 Everybody always wants to talk about speed and performance when it comes to new bows and crossbows. The Nitro XRT is no slouch in the speed department as it can shoot up to 470 fps. The Evo-X arrows that come with the package weigh about 445 grains and are able to travel up to 440 fps out of the crossbow. If you’re interested in shooting speeds up to 470 fps, you’ll want to purchase the TenPoint Pro-Lite arrows. They’re a bit lighter than the Evo-X arrows, as they weigh a mere 385 grains, but if you want that extra speed or are shooting long distance the Pro-Lite arrows are what you’re looking for.

Included in the Nitro XRT Package along with the crossbow itself is; 6 Evo-X Center Punch arrows, a 3-arrow TenPoint quiver with ambidextrous mount, the Evo-X Marksman crossbow scope, the ACUdraw Pro cocking device, TenPoint’s STAG hard crossbow case, and a neoprene sling. It’s essentially everything you need to get out in the woods and hunt with. The retail value of this entire package is $2,549.

We were able to get a quick look at this crossbow back in January at the ATA Show, and we were blown away by how amazing it felt and shot. Once we got it at the office and were able to put a few more arrows down range with it, it impressed us even more! The ACUdraw Pro cocking system made shooting this thing over and over again, very easy. But in reality, it only saved us a little bit of time since it took only about 5 or 6 shots to get it sighted in at 30 yards.

The Nitro XRT by TenPoint Crossbows is absolutely amazing and without a doubt one of the top crossbows on the market today. The speed and kinetic energy that you can get out of it is astonishing. It’s extremely compact and maneuvering through the woods with a crossbow has never been easier. One of the best things about the reverse draw design, is the balance that you feel in the crossbow. On a regular draw crossbow, the weight sits out in front of the bow and can be difficult to hold upright, but with the riser in the middle of the crossbow, the weight sits right above your non-shooting hand and makes it easier to shoot. Overall, the Nitro XRT package has all the bells and whistles that you could want and if you’re looking for a top of the line crossbow, this is it!

Brad Kaufmann
Brad is a full time employee with Bowhunting.com. He works behind the scenes with both the Bowhunt or Die Webshow, and many of the videos and articles that Bowhunting.com produces.
View 4 Comments
Post a Comment
Login with Facebook
Login with Google
Login To Account
Cancel reply
You may also like: