When I lived in Montana a few years back, I would make regular trips over the mountain range into Idaho each spring in search of opportunities for bowhunting black bears. After several years of bear hunting from a treestand over bait, I found myself looking to turn things up a notch. Don’t get me wrong. I love bear hunting of all kinds, but shooting a bear from a treestand at 10 yards seemed a bit anti-climactic after all the hard work I’d done scouting, running trail cameras, and hauling bear bait. So I began to make plans for a springtime ground pounding from the Double Bull blind on the next bear that I would kill. The toughest part of baiting bears is often making that first run up the mountain to get the bait barrel and bait in place.

After weeks of hauling groceries in for the local black bears, I finally had several players coming to the table on a consistent basis. The bears were big, and they were coming to the bait like they were on a schedule. The bear that I was after was a big, black, block-headed bear that had apparently made himself at home in the area around my bait site. He was a beast! Don’t start hunting your spot just because you have a bear show up on camera. Wait until that bear is consistently showing up in the daylight.

On the day that I went in for the kill, I arrived extra early so as to beat the bears that continued to arrive earlier and earlier as they competed for grub. But when I kicked back in my chair at 2:00pm and realized I’d have nearly 7-8 hours before dark, I started to second guess the idea of getting in the blind so early. It would be a long sit, and I was surely gonna run out of snacks and reading material long before prime time. I always thought that bear hunting from a ground blind would turn the excitement level up a couple clicks. But I had no idea what I was getting myself into.

A couple hours into my sit, I found myself hunched over in my chair with my head down on my hands trying to take a little nap. It was working pretty well, and I was just starting to get gone when I heard something take a step very close to my blind. As slow as I could, I raised my head from my hands to see a bear just 4 big steps from my blind. He was so close all I could see was his big chocolate back moving from left to right as he made his way to the bait barrel. It was a big bear – and one I hadn’t seen on trail cameras yet. I like to use fry grease in front of my bait barrels. Bears love grease, and with grease on the pads of their feet, they lay down a nice grease scent trail when they leave the bait site, inviting other bears to the bait.

He was way too close to power up my video camera. I figured he’d surely hear it click on and come to life, so I just froze and let him move a little further from my blind.

When I saw that he was committed and focused on the food, I turned my camera on as he walked up to the bait barrel, just 12 yards away.

I did my best to turn in my chair and square up for the shot, but the sound of shuffling caught the bear’s attention and he took off running back up the hill. But, as quick as he left I saw him turn and begin walking back down to the barrel.

Strangely, however, he was no longer focused on the food. In fact, he walked right past the bait barrel and continued right down the hill – toward my blind. At 8 yards he stepped up on the tree trunk in front of my blind and stared into the window. He knew I was there. He knew I was the one that interrupted his dinner. The only question was, what was he gonna do about it now? 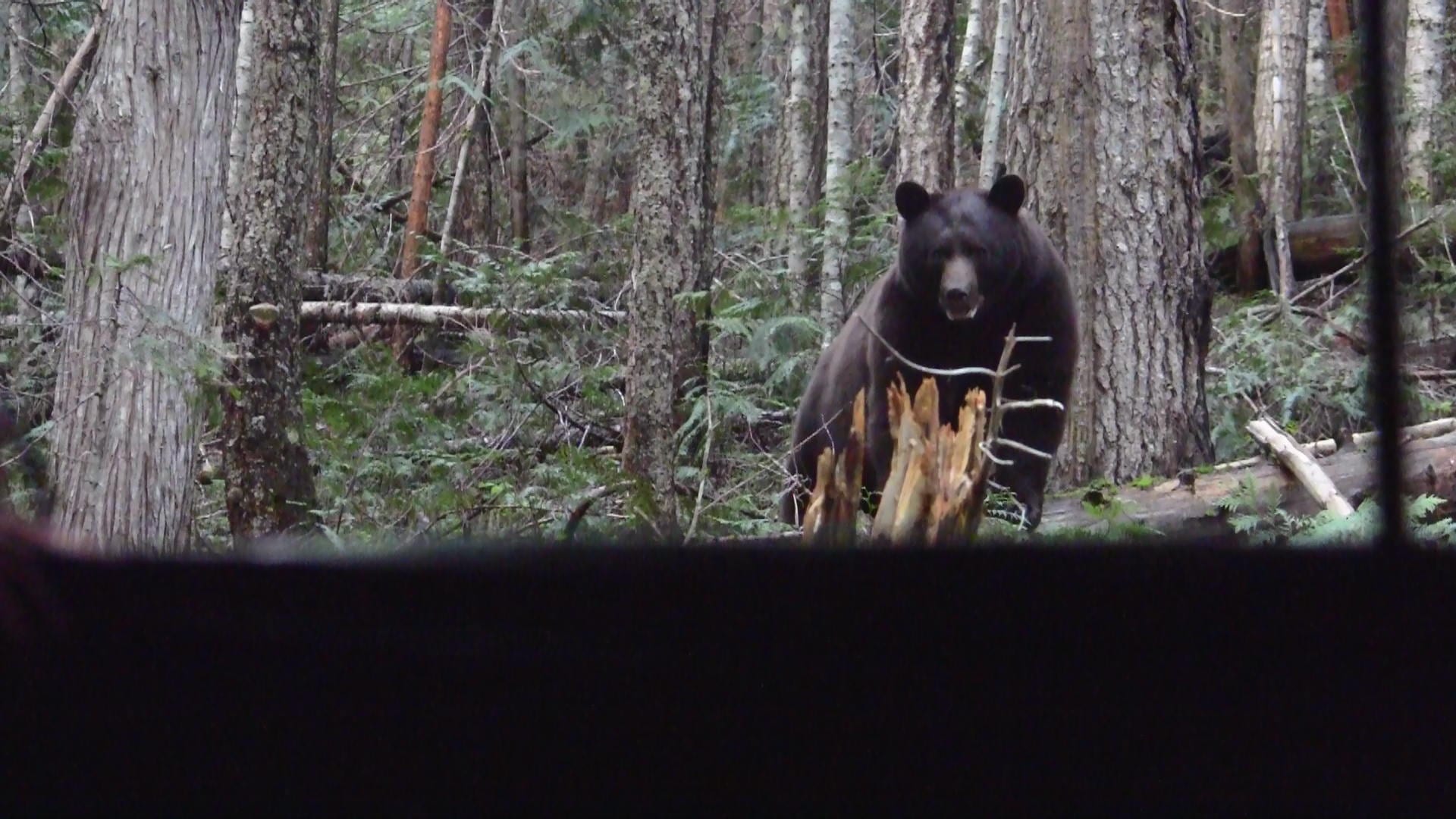 When this bear walked back up and stared me down at 8 yards, I thought I was gonna die.

I honestly thought this was about to be the moment I’d meet Jesus face to face. I was about to be eaten by the prettiest chocolate colored black bear I’d ever seen. I prayed hard that the bear would leave me alone and go back to the bait. And when he stepped on over the tree trunk and headed back up to the barrel I knew my prayers had been answered.

I was ready to make the shot this time and dropped the string when the bear leaned forward to scoop dog food from the bait barrel. I was worried that my shot was too far back, but at the angle he was facing it smacked him good and he only went 50 yards before tumbling back down the hill. Dead. My bear ran just 50 yards before crashing back down the mountain into this old stump hole.

It was the most adrenaline-packed hunt of my life. The roller coaster of emotions and excitement was enough to kill a man. The bear was big enough that I couldn’t budge him once I rolled him back down to flat ground. So the packing chores would begin right there.

Though it may have nearly got me killed, my quest to go face to face with a black bear with my bow had now become a reality. A big, chocolate colored black bear is a fine trophy, especially when the deed is done at eye-level.

5 Moves to Make When Ground Pounding for Bears

1) Put your blind up prior to your hunt. Give the local bears ample time to get comfortable with it being on the scene. I like to put my blind in at the same time I put the bait barrel in. That way they’re more focused on the food and will often completely ignore the blind.

2) Keep your blind scent free and brushed in. Bears are curious. If they smell your human scent (or the smell of bait, grease, etc.) on your blind they will trash it. Keep it as clean as possible. I also like to brush it in really good so it doesn’t stick out, catching the eye of a curious bear. I try to stack logs and brush around the blind to create a slight buffer to deter any lazy bears from messing with it.

3) Get close, but not too close. I was accustom to hunting from treestand sets just 8-12 yards from the bait barrel, so I figured that would work fine for a ground blind as well. But I didn’t figure in leaving space for a bear to approach or circle downwind of the bait. The result, a bear at 4 yards from my blind. And while it was an adrenaline rush, it was a bit binding on being able to move and function as I prepared for the shot. It wouldn’t have hurt to be another 10-15 yards further off the bait site. Signs of the times.

4) Let your trail cameras tell you when it’s time to hunt. I had an old bear hunter tell me, “When he’s comfortable enough to crap at the bait site, it’s time to go in and kill him. Don’t go in and hunt until you see that first turd.” And while that may or may not sound like fairly “solid” advice, I opted to trust my trail cameras to tell me when I needed to be in the blind. When I saw consistent visitors at the blind during daylight each evening on my camera, I went in for the kill.

5) Make your move with good daylight. Bears are bad about waiting until the very last light to make their approach to the bait. Unfortunately, this is a tactic many of the biggest and oldest bears like to play. But keep in  mind, the inside of the ground blind will be much darker than outside the blind. I’ve had several really good bears over the years that I simply couldn’t see through my peep while hunting at last light from the ground blind. Again, your trail camera will tell you when you have bears coming in during full daylight. Capitalize on those opportunities. Don’t push your luck, holding out until last light for a bear that you aren’t likely able to see in your sights.