Bear season is right around the corner.  If you haven’t black bear hunted, consider doing it now!  Bear hunting is very enjoyable and is a dream-come-true for many bowhunters.  Most bear hunting is done over bait piles.  Most bait piles are only twenty yards from the treestand, creating an easy shot.  If hunting bears over bait doesn’t sound like fun to you, you can hunt with dogs or spot and stalk them.  In either case, close shots are the norm.  The average shot on black bears is 20 yards or less.  I shot a large bear a few years ago that was a mere eight or nine yards away when I let the arrow fly! (additional black bear tactics) 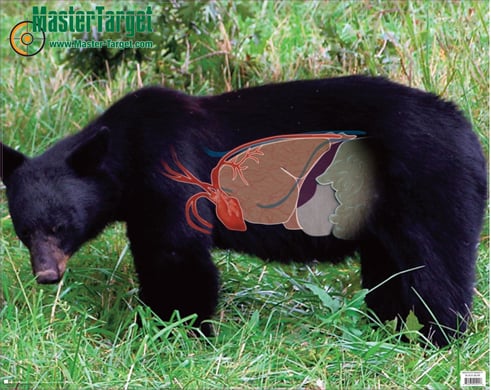 The Right Spot
The biggest issue that many first time bear hunters face is “where to aim” on a bear.  Their lungs are not positioned like the lungs of a whitetail.  A black bear looks like a big pile of black fur when you are aiming at one.  Choosing the right spot can be a daunting task.  To prepare yourself for the task, buy a bear target.  There are several 3D bear targets available.  Master Target makes a face target like the one shown here that has the vitals outlined on it so you can become familiar with the vitals before you go hunting. The author with a nice Quebec black bear.

Hunting Methods And Opportunities
Black bear hunting is a bowhunters’ dream-come-true because the success rate on guided and unguided black bear hunts is extremely high; making it the perfect hunt to go on if you are on a budget and want to travel out of state for an adventure.  A few years ago, I hunted black bears in a remote area in Quebec, Canada.  It truly was an adventure.  The hunt cost $900 per hunter, which included lodging and baits.  Out of ten or eleven guys in camp, all but one tagged out.  Odds like that are hard to come by in a whitetail camp and bear hunting, especially if you hunt in Canada, can be much more of an adventure than a typical guided whitetail hunt. (preventing black bear attacks)

Matt Guedes from Colorado has bear hunted several times with Delta Big Game Outfitters and owns a booking agency called thetravelinghunter.com.  He believes bear hunting can be a great family experience.  “Last year, I took my son, Tekoah with me to Saskatchewan and we both tagged bears with a bow.  We had a great time and made some awesome memories.  Anyone wanting to leave their backyard to hunt something other than whitetails should consider hunting black bears,” Guedes said. (black bear video) 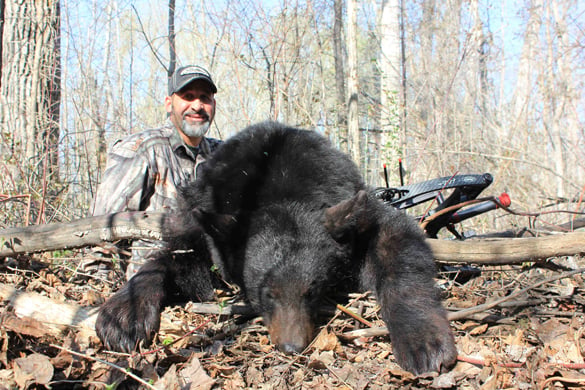 If the idea of heading north doesn’t get you excited, realize there is plenty of opportunities “state side”.  Table Mountain Outfitters offers great guided black bear hunts in Idaho.  They offer baited hunting as well as hunts over hounds.  Nothing beats the sound of a barking hound on a hot track!  If you are on a tight budget, many states offer great bear hunting where you can hunt on your own without spending much money.  In my home state of Michigan, getting a bear tag only takes a few years’ worth of preference points and the odds of killing a bear are good.  Many states offer similar opportunities.

If you are into exciting hunts, consider calling in black bears.  A few years ago, a friend of mine from Knight & Hale Game Calls called in a black bear with a distress call.  “I was hunting over bait but I brought a predator call with me.  I wasn’t seeing any bears, so I started to blow on a call.  I kept calling for almost an hour and all of a sudden, a bear snuck in to see what was making the noise and I shot the bear,” Lawrence Taylor said. (book a hunt)

Gear For The Job
There are many ways to hunt black bears and most of them don’t require much out of pocket cost, physical conditioning, or months of preparation.  In fact, another benefit of bear hunting is you don’t need much specialized gear.  If you are a bowhunter, you probably already have almost everything you need.  If you plan a trip to Canada, there are a few items I suggest you bring with you.  First, bring a treestand.  Many Canadian outfitters don’t know what a real treestand is.  The treestands they use are made of plywood, 2×4’s and pine branches.  The first stand I laid eyes on when I went bear hunting looked like it was built in 1950.  The seat was made out of a 1×6.  After the first day of hunting, I brought a climber with me daily.  Bringing your own stand also gives you flexibility to move if needed.

Black bear hunting can be a great trip for a young hunter to go on because of the ease of shooting opportunities.

I don’t leave home without a scouting camera either.  Large bears are notorious for only hitting the bait sights after dark.  A well-placed scouting camera allows you to see who is coming to dinner and what time they are coming.  If you have two or three cameras, bring them all along.  Most outfitters have numerous bait sights.  Placing several cameras can help you zero in on the baits that are being hit the most. I also like to bring some type of gel or spray attractant.  Bears are like little kids.  They like sweets.  Many companies make sprays that smell like blueberries or cookies.  Spraying an attractant on a tree near a bait sight can help you lure in a bear and can help you get a perfect shot.

When hunting in Quebec, I sprayed a tree near my stand that required the bear to come in broadside to smell the tree.  I shot my bear near the tree.  I wear scent eliminating clothing when bear hunting too.  A bear has an extremely good nose.  I store my clothes in an airtight container when I am not hunting and take several showers each day.  One whiff of a human and most large bears will take off. I also bring a scale to camp.  Guessing the weight of a bear can be difficult, so bringing a scale can provide you with the exact weight of the bear you shot.  Few outfitters have scales because they want you to think your bear is bigger than it is. (shop black bear gear)

Judging Before You Shoot
That brings up another good point.  Judging the size of a bear can be extremely difficult if you haven’t hunted them much.  There are a few tricks you can use to help judge the size of a bear at the bait.  If a bear must stand on its hind legs or tip a barrel over to see inside and eat out of it, it is probably a small bear.  A large bear is at least about as tall as a barrel.  A large bear often has a large crease in the middle of his skull and his ears appear small and far apart.  A small bear has large ears that are close together.  A small bear often looks like Mickey Mouse.  When I sprayed the tree with an attractant, I did it high enough off the ground that any big bear that came in would not have to get on their hind legs to get to the spray.  The last thing you want to do is shoot a 125-pound bear.  Watch many bears before taking a shot and watch videos on the subject before leaving home.  A 125-pound bear can fool many hunters. 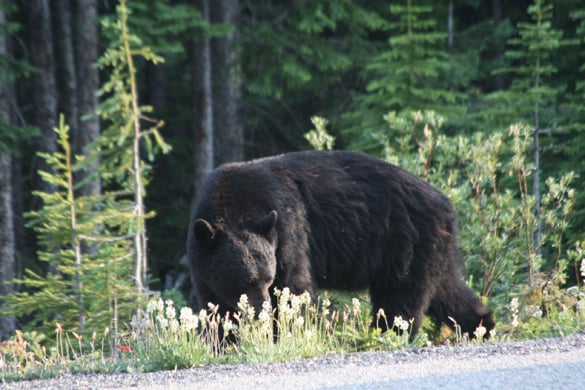 Black Bears are perhaps one of the hardest animals to judge in the field. Take your time and look the animal over before coming to full draw.

Tracy Breen
Tracy Breen is a full-time outdoor writer and marketing consultant in the outdoor industry. Over the past twenty years, he has been able to hunt and fish all over North America. Tracy was born with cerebral palsy and often writes and speaks about overcoming physical obstacles, chasing dreams and living life to the fullest. Tracy writes for a wide array of publications including Outdoor Life, New Pioneer, North American Whitetail, Buckmasters, Petersen’s Bowhunting and Bowhunting World to name a few. Tracy resides in Michigan with his wife, Angie and their two boys Thane and Hendrik.
View 1 Comment
Post a Comment
Login with Facebook
Login with Google
Login To Account
Cancel reply
You may also like: