With deer underneath and all around munching on alfalfa, I drew my bow very carefully so as not to alert any of them to the two bowhunters perched 20-some feet overhead. It was the moment I’d dreamt about for many years prior to reaching Wisconsin’s then-minimum hunting age of 12. A clean 10-pointer fed broadside, and my brother whispered the yardage as I settled my pin on his ribs.

The shot broke well, but somehow, my arrow passed right over the buck’s back. Obviously, all of the deer scattered. Perplexed from having been so in tune with my shot process, I looked over my shoulder at my brother. “He ducked your arrow,” he explained. It was my first crack at a deer with my bow, and I couldn’t believe that my well-executed shot ended with a blood-less arrow buried in the soil.

Bowhunting, by and large, is a game of variables and uncontrollable factors. One of the most common that spells the difference between a lethal hit and a marginal hit or miss is deer ducking as your arrow speeds downrange. It’s frustrating, but it isn’t something that we can control or eliminate. All we can do is analyze the circumstances and select the best possible time to shoot.

In this piece, I’ll outline some reasons why deer duck. By studying these points, I hope you’ll improve your ability to read the situation and select the best time to take your shot. Let’s review.

Deer, by nature, are flighty critters. Aside from occasional curiosity, they flee at the first hint of danger. When they do, they lower several inches to a foot, then spring and whirl in the direction opposite the threat. Danger to deer is anything that looks, smells or sounds unusual. Thus, the audible sound of a bow being fired sends an immediate red flag, and their response time can beat even an arrow traveling faster than 300 fps.

Knowing that, it should go without saying that any deer, calm or alert, could drop beneath your arrow. Prepare yourself to accept that fact, because if you hunt long enough, it probably will happen to you.

One of the chief reasons deer duck arrows is hunting pressure. As I said in the previous paragraph, deer are high-strung by nature. Add in hunting pressure, and the likelihood of a ducking episode increases substantially. If you hunt on public lands where multiple other hunters are chasing the same deer you are, expect deer to be on the lookout and ready to react immediately to anything unnatural, including your bow firing.

Contrarily, where pressure is highly regulated, say on leases or large tracts of private land, deer are far more relaxed. I’ve seen this during the few times I’ve hunted with outfitters. I’m not saying that private-land deer don’t duck. I’m saying that hunting pressure definitely has a bearing on how deer move and react. Where pressure is greater, ducking potential increases. Where pressure is lower, it decreases.

This is a big one. There isn’t a bow in the world that’s perfectly silent. Even if there was, an arrow cannot fly silently through the air, either — vanes and broadhead blades slice the air. And what sounds quiet to us is highly recognizable to deer. So, don’t think that just because you can hit your deer target’s 10-ring every time from 80 yards that a live deer won’t react to your arrow; it likely will. It’s highly possible to have an arrow ducked by a 30-yard deer. The farther the shot, the greater the chance it will happen.

All you can do on shot opportunities near or at your maximum effective range is be responsible and read the situation. Don’t launch a hail mary just because the opportunity is there. If the animal displays any alertness whatsoever, rethink your decisions. If you feel the deer will react, pass the opportunity and wait for a closer shot. Trust your gut.

Some bows are louder than others. The more shock and vibrations your bow has, the more it will impact the shot outcome. Or, it could be that an accessory or cam-module screw has loosened and rattles when you shoot. Always go through and identify any noises your bow makes that can be fixed. The quieter your bow shoots, the better.

That goes for arrows, too. Some vanes and feathers are louder in flight than others. And, loose broadhead blades or even cheap broadheads can rattle in flight. Actually, that’s probably a greater factor in deer ducking than a noisy bow since it is the only part of your equipment that travels toward the deer, gaining volume as it gets closer.

Deer are far more relaxed in places where they feel safe. Often, though, we hunt them in areas outside their comfort zones. If you’re a bait hunter, for example, you’re often drawing deer to an area that exposes them. Or, if you’re hunting field edges or a food plot, deer will be exposing themselves in the open while feeding. Plus, most deer are just plain alert while feeding, often lifting their heads between bites to scan for danger.

In the timber or in areas with security cover, deer move about much more calmly. In general, deer are far more likely to duck an arrow in a feeding situation than they are in the timber on a natural travel route. Every deer that has ducked my arrows was in a field and feeding. That says something.

Deer are concerned about feeding during early season. They’re very cautious since the rut isn’t numbing their senses. When hunting over food sources at this time, be ready for a ducker.

As the rut comes in and especially when bucks are chasing does, they’re focused on more than just feeding. Their preoccupied minds can get them in trouble — I’ve never had a rutting buck duck an arrow.

After the rut, deer are not only back to feeding, but they’ve been hunted all season long. On a calm and frigid late-season hunt, deer farther than 20 yards are very likely to react to your bow and/or arrow. Late-season deer are sharp.

Every Situation is Unique

I’ve had deer duck arrows on 40-yard shots, and I’ve also had them watch arrows fly through the air toward them and strike their lungs on 43-, 51- and 60-yard shots without twitching. The two 40-yarders were at calm deer feeding in fields, while the longer ones were on traveling deer preoccupied by rutting.

In general, I think we must let our confidence (don’t get cocky, though) guide our decisions to shoot or pass. And then, the cards will fall where they may. Remember: It’s bowhunting. Deer are deer. We can’t control everything.

Some folks believe you can combat ducking by aiming for the bottom third of the deer. They reason that if the deer stays put, a heart shot will result. If the deer ducks, it will be a high lung hit. I don’t do this because I fear shooting underneath deer or making a superficial hit beneath the heart. I’ve had good success with aiming midship. Find what works for you.

Like many other variables in deer hunting, arrow ducking is beyond our control. If you have any input about this topic or stories of deer that have ducked your arrows, please comment below.

Darron McDougal
Darron McDougal is a full-time freelance outdoor writer/editor who lives in Antigo, WI with his bride, Becca. He's hunted in 12 states and successfully taken elk, bear, hogs, turkeys, pronghorn, whitetails, and mule deer, most with archery equipment on DIY hunts. The McDougals enjoy all things hunting and shooting. They believe in God and love to travel.
View 2 Comments
Post a Comment
Login with Facebook
Login with Google
Login To Account
Cancel reply
Other Articles 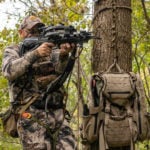