Most bowhunters envision making the perfect shot before releasing the arrow. After all, a good, quick kill is what we strive for. It’s the ethical thing to do.

For bowhunters, that only comes in the form of a broadside heart or lung shot. Sure, a broadhead to a major artery will bleed a deer out in seconds. But that shot placement is neither advisable nor easy to make.

As such, these are seven bad shots hunters make, and everything that comes with them.

Located between the back of the lungs and front of the paunch, the liver is likely the third most common hit, after the heart and lungs. It’s a slender organ that runs up and down alongside the diaphragm.

A liver-hit deer will react similarly to a deer struck more forward in the vitals, so it’s not always easy to gauge this shot based on wound location or post-shot reaction alone. However, there are several clues that can help make a determination.

Follow-Up Shot: If possible, try to get a second arrow into the wounded animal, but don’t pursue the deer to do so.

The Arrow: With a complete pass through, expect dark-red blood to cover much of the shaft and fletching.

The Blood Trail: The blood might appear promising at first, and could even be easy to follow the first 100 yards or so. But sooner or later, it’ll probably fade to specs of blood, if that. You’ll see mostly droplets, and not spray, since there is no significant pressure within the liver to force out blood.

The Wait: Allow approximately five hours from the time of impact before blood trailing.

Described as the stomach and intestinal region, the paunch is a really bad place to shoot a deer, and leads to a slow, painful death for the animal that succumbs to it.

Most of the time, a paunch-shot deer will run a few yards before halting. It might stop, hunch its back, and lower its head. Or it could walk off stiff-legged at a slow pace. Regardless, the key behavior is an arched back.

Follow-Up Shot: If the animal remains within range, take another shot. If it beds down in sight, and there is plenty of ground cover between you and it, try to get another arrow in the deer.

The Arrow: There might be some red blood along the shaft. However, it will mostly be covered in green or dark-brown stomach matter. It will smell quite repulsive.

The Blood Trail: Expect small droplets, or no blood at all. There might or might not be digestive liquids along the trail. If there is no blood trail, comb the property, and especially search along water sources.

The Wait: Allow approximately 10-15 hours from the time of impact before blood trailing.

The upper half of the hind leg is a blood-rich area, but a shot to it isn’t always fatal. If struck forward enough that the broadhead clips the intestines, it could produce a slow death. If the broadhead centers or nicks a major artery — such as the aorta that runs along the spine and top of the ham, or the femoral that runs down through the ham — can produce a quick death and gory (yet short) blood trail. If neither arteries nor guts are hit, the deer lives, barring infection doesn’t set in.

That’s a wide range of possibilities, though. And how a deer reacts to a leg hit won’t shed many clues. If you see jets of blood pumping out, sure, it’s an arterial hit. Other than that, who knows.

Follow-Up Shot: Send another arrow immediately. If possible, get down and pursue the wounded deer until a more successful arrow finds the vitals.

The Arrow: The arrow will likely break due to heavy muscle and hard bones. Still, if recovered, it’ll likely have bright-red blood on it.

The Blood Trail: A meat-hit deer usually bleeds well for a short distance before eventually drying up. An arterially hit deer will produce a short but impressive blood trail.

The Wait: Follow up immediately. Most of the time, the deer will die within seconds (arterial hit) or not at all (muscular wound).

The lower leg is one of the worst places to hit a deer. Odds of a recovery are minimal, and it produces a painful wound that takes time to recover from. No one wins.

Shots below the belly line are almost never directly fatal. Infection might set in, or a predator might bring down the injured animal, but the wound itself generally won’t.

Follow-Up Shot: Get another arrow in the deer as soon as possible, even if that means pursuing the deer.

The Arrow: Most of the time, the arrow will break. Even if it doesn’t, expect minimal blood on it.

The Blood Trail: There might be a little bit of blood at first, or in places where the deer walks slowly or stands still. Don’t expect more than that.

The Wait: Pursue the deer immediately, and don’t stop until you get an arrow into the vitals, or you arrive at a property line.

This region of a deer’s entrails is well protected by the scapula — a very wide and thick bone that protects deer from pointy things. A shot that is low and back enough might do enough damage, but most bow-and-arrow setups can’t adequately penetrate the heavy bone.

This shot location will produce a heavy smack or thud sound. Penetration will be minimal. And the arrow will likely snap off.

Follow-Up Shot: For a low-shoulder hit, and if the deer remains in range, put a second arrow in it. If it’s a high-shoulder hit with minimal penetration, do what you can to get another arrow into it.

The Arrow: The part of the arrow that made it into the deer will have blood on it. However, you’ll likely only recover a piece of the shaft, but you can hold that up to a good arrow to determine penetration depth.

The Blood Trail: There will be minimal blood, but what is present will leave blood high up on standing vegetation, such as grasses, shrubs and trees.

The Wait: If the hit is low enough (arteries, heart or front of the lung), this will be a short wait. If the hit is high (scapula), follow up immediately in hopes of a second shot.

An arrow to the neck is a dicey hit. Strike the spine and the deer drops paralyzed. Hit the jugular and it paints the woods red. Center the esophagus and it has an excruciating death. Everywhere else is merely a flesh wound.

Follow-Up Shot: if you don’t see the deer drop, or ropes of blood streaming out, it’s likely best to follow up immediately.

The Arrow: The arrow will likely be broken, but whatever part of the shaft that breached the hide should have bright-red blood on it.

The Blood Trail: The quality of the blood trail will vary based on the exact hit. An arterial wound will produce heavy blood, though.

Due to the infamous string jump, many a deer has been hit in the spine. This isn’t a shot you want to take, but it happens. While the wound itself isn’t fatal, it generally renders the deer immobilized, effectively allowing for a second shot opportunity.

A deer hit squarely in the backbone will fall and not get back up, despite its efforts to try. However, if the broadhead hits close to the spinal cord, but does not sever it, the animal might fall and appear to be paralyzed, when in reality it is only in a short-term state of shock.

Follow-Up Shot: In either instance described above, quickly dispatch it with a second arrow.

The Arrow: The arrow will either be broken, or will remain in the deer.

The Blood Trail: There will be little to no blood.

The Wait: No wait time. Launch a second shot immediately.

Watch enough outdoor TV and sooner or later you’ll hear a hunter use the term, “Smoked ’em,” after making a shot. Sadly, in many cases, these animals are far from “smoked.”

Don’t let these TV hunters confuse you on what proper shot placement looks like. And when bad shots do occur, keep the steps mentioned above in mind to help you find more deer at the end of the blood trail.

Josh Honeycutt
Josh Honeycutt is an avid deer hunter. He's hunted whitetails from South Carolina to South Dakota but spends most of his time hunting in Kentucky. Honeycutt has written and created other forms of media for more than 60 media companies in the outdoor industry, including: North American Whitetail, Whitetail Journal, Field & Stream, Outdoor Life, Deer & Deer Hunting, Rack Magazine, Inside Archery, Game & Fish, Fur-Fish-Game, and others. He's also very active in digital content, specializing in writing, editing, photography, videography, podcasting, and more. You can see how his deer season unfolds each year on Midwest Whitetail and Chasing November.
View 1 Comment
Post a Comment
Login with Facebook
Login with Google
Login To Account
Cancel reply
Other Articles 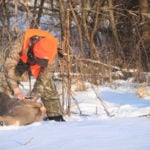 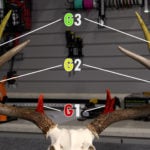 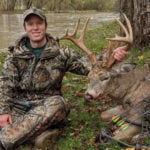 Tools for Getting Your Deer Out of the Woods
September 1st, 2021