“Run and gun” style hunting has grown wildly in popularity in recent years, and for good reason.  Relocating your stand position based on weather, wind, and active deer sign is a great way to stay on top of deer and fill your tags.   It’s also a great way for public land bowhunters to move around from place to place when leaving a permanent treestand isn’t an option.

Going undetected on the hike into your hunting spot and while setting up is one of the most important aspects of a bowhunter’s routine.  In fact, it’s amazing just how close we can get to deer if we take our time and remain as quiet as possible on the way in.  A major component to remaining undetected is to make sure your equipment is as quiet as possible. And nothing seems to make as much noise on the walk-in and during setup as our treestands and climbing sticks.

With an upcoming trip to hunt public land in Kentucky during the early season, I decided to silence a set of Lone Wolf climbing sticks and an Assault treestand to use as my run-and-gun mobile setup.  Here’s a quick step-by-step guide on how I prefer to silence my Lone Wolf treestand and climbing sticks.

The Stealth Strips product by Stealth Outdoors is hard to beat when it comes to silencing your gear quick and easy. As mentioned in the video above, the adhesive silencing product comes in a variety of options designed and cut specifically for the features on your treestand and climbing sticks.  You can choose to disassemble your climbing sticks entirely prior to installing your Stealth Strips, or you can cut the strips into pieces and piecemeal them together on your sticks.

Personally, I prefer to disassemble my sticks, clean them off, then install the Stealth Strips and reassemble the hardware.  It takes a little more time this way, but results in a cleaner looking install with more coverage. 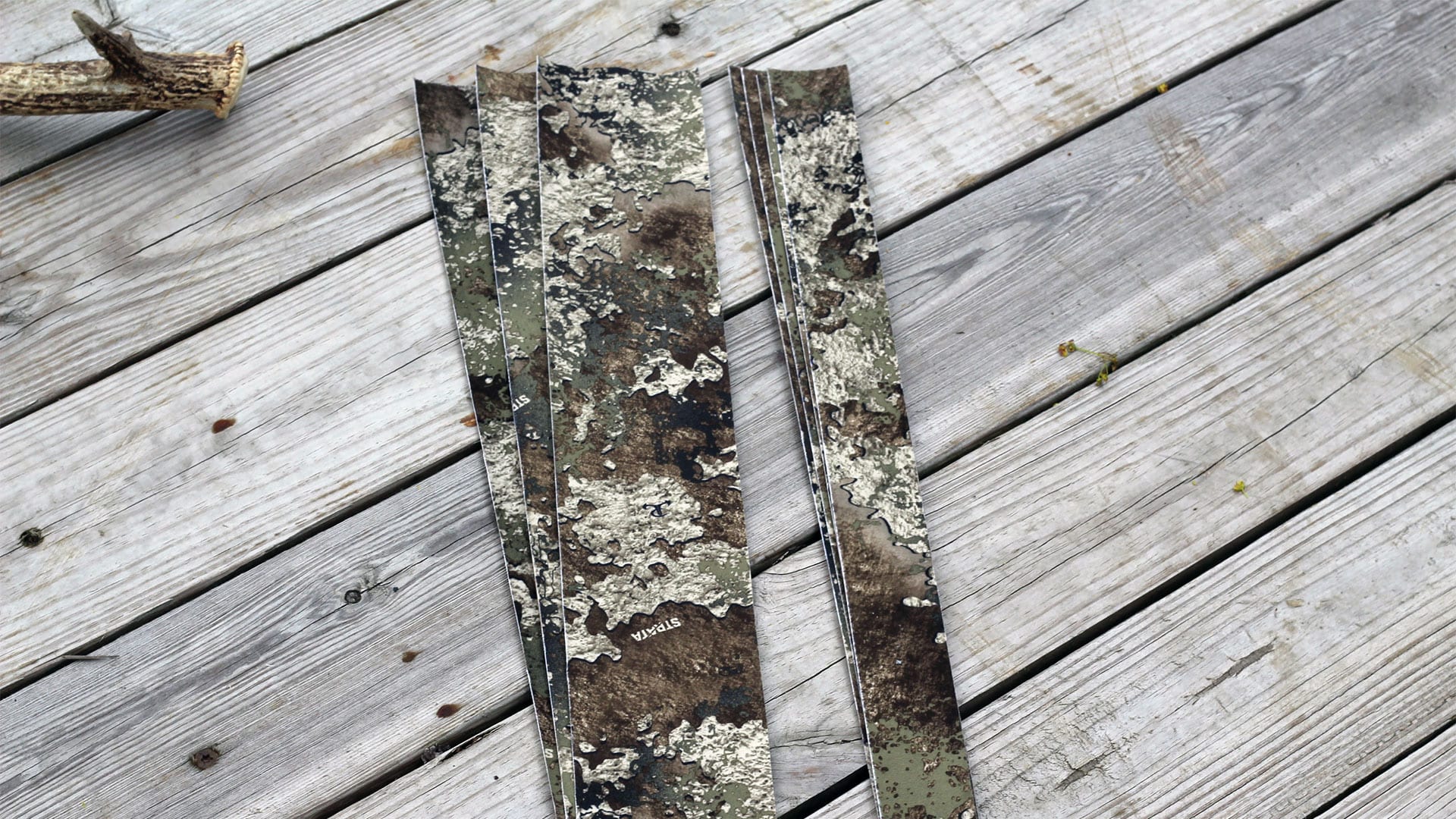 Stealth Strips make silencing your treestand or climbing sticks a cinch.  The True Timber Strata camo pattern not only looks nice, but also helps your sticks blend into their surroundings much better than a solid color. Photo by Stealth Outdoors. Although they take some time to install, once you’re finished the Stealth Strips not only look great but play a huge part in creating a silent treestand setup.

Your treestand platform may make contact with a number of things throughout your hunt, but none quite as bothersome as the seat bouncing and banging against it while walking in.  And it never fails that when you’re trying to be extra quiet, that’s when your stand starts making metal clinking noises.

A few Stealth Strips or any sort of camo wrap across the front of the platform will eliminate this problem and keep you quiet on the hike in.  Another tip to help keep down noise between your Lone Wolf seat and platform while packing your stand is to make sure the seat post is secured tightly against the platform.  I prefer to use a 2nd set of Kwik Straps to go through the platform, around the seat post and around the climbing sticks while packing in and out.  This keeps everything nice and snug and really cuts down on noise. The noise from the seat-to-platform contact on the hike in will drive you nuts and may scare deer before you ever get close enough for a shot. Silencing the front of the Lone Wolf platform is quick, easy and one of the most critical points to help eliminate stand noise.

In my experience, the piece of gear that seems to make the most noise by banging into things at the most inopportune times is the buckles on the tree straps.  While they may be small, they swing around while packing in and out and also while setting up your stand, which means they always seem to find their way to bang into things.  There are a few ways to silence your buckles, including covering them with sections of rubber innertube, a set of Yak straps, or with a set of buckle covers from Stealth Outdoors. Covering the buckles on your straps is one of the most important steps to having a silent treestand setup.

If you wear rubber boots, the friction created by your boots rubbing against the rubber-coated cables on your treestand can create one of the most obnoxious game-spooking sounds ever. Eliminate this issue before it ever happens with Stealth Strips cut specifically for these cables. Don’t forget the cables! The rubber boot contact on these rubber-coated cables will squeak at the worst possible time.  This stand has a lot of additonal silencing around the platform edges and on the seat post, which comes in handy, but is a luxury.

Strap It All Down Tight

Making sure the treestand and climbing sticks on your back are strapped down tight on the walk-in is the key to keeping everything stealthy for the commute to your stand. One of the easiest ways to do this is with the Kwik Straps from Lone Wolf. They come in 2 and 4 foot options for use with climbing sticks, hang-on and climbing treestands, as well as strapping the load to the rack on your ATV or UTV. 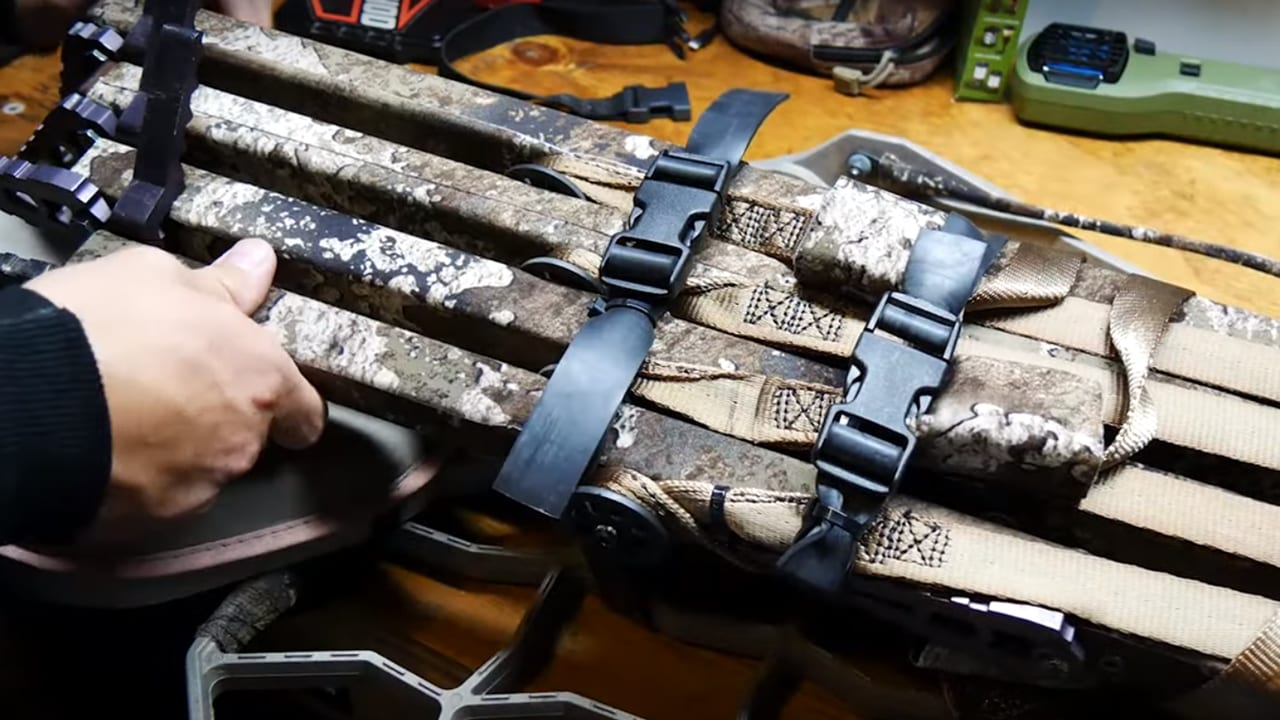 Take the time to make sure your treestand and climbing sticks are deadly quiet this season. When you do, you’ll soon realize just much closer you can get to the game you pursue.

We want to hear from you? What steps have you taken to make sure your treestand is whisper quiet this season? Comment below and let us know what works best for you.

Follow Me
Justin Zarr
General Manager at Bowhunting.com
Justin has been bowhunting for more than 25 years, harvesting a number of P&Y whitetails in his home state of Illinois during that time.  He co-hosts the popular bowhunting show 'Bowhunt or Die' and is a frequent guest on numerous hunting podcast.  Justin lives in the NW suburbs of Chicago with his wife and 3 children.
Post a Comment View 1 Comment
Post a Comment
Login with Facebook
Login with Google
Post as Guest
Cancel reply
You may also like: