I’ve had climbers and lock-on stands stolen. And I’d bet someone would have stolen a ladder stand of mine if I owned more than the two I do. It’s a sad world we live in. But it’s the reality we face. Treestands, trail cameras and all other gear we leave in the field is subject to thieves in the modern world. Below are a few tips for preventing treestand theft. You can’t tag a big buck this season if your stand is not safe and secure. Follow these few simple steps for preventing treestand theft.

The easiest and most effective thing you can do is lock up the stand. You can purchase a chain and padlock for under $20. A cheaper alternative is a bicycle lock. While a chain or cable is good, shiny ones are not. Choose ones with dark, flat colors such as brown or black. The last thing you want is a passerby catching a glint of light off a shiny silver log chain. Have you taken the steps to deter a treestand thief? A simple lock and chain or cable may be all you need to keep your stand on the tree.

Similar to the color of the chain, use a dark-colored stand. Grant it, everyone is moving toward the aluminum stands due to their light weight and maneuverability. That said, the tradeoff isn’t a good one for locations where theft is more probable.

Pick a tree that offers cover. I like trees that split or have major horizontal limbs. You can situate the stand so that the platform almost rests (but not touching) the horizontal limb. This provides some natural cover and breaks the contour and pattern of the treestand platform. Also, have good canopy cover so the stand is shaded.

The second line of defense is good cover. You can’t see most of my stands from the ground. I intertwine tree limbs and brush in and around the stand. If anything, my stands look like giant squirrel nests. Concealing stands in this manner keeps other hunters from eyeing your treestands. Adding cover to conceal the stand doesn’t just hide them from other people, it hides them from deer as well. This allows you to get away with more movement in the stand and keeps your stand from burning out so fast. 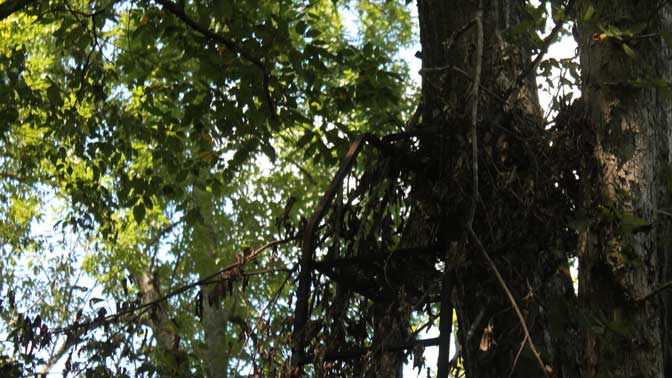 Adding brush to your treestand will help conceal your stand from the eyes of deer…and a thief.

It sounds cliché, but cameras work wonders. Not all do, but many hunters place cameras near stand sites. Angle those cameras in such a manner that it monitors treestands. Point them in the direction stands are located.

Sure, many of you are saying if they’ll steal the stand they’ll steal the camera. That’s true. But you can prevent camera theft in a variety of ways, too. I run cables and padlocks on all of my cameras. Furthermore, I camouflage my cameras with twigs, leaves and other vegetation. Sometimes, I even take it as far as hanging cameras up in trees.

Another option is to hang cameras in the very tree your stand is in. Just remember to lock it to the tree. I really like this option for public land stands. As you probably know, many public lands allow you to hunt another person’s stand if they don’t make it to that stand by a certain time. While you can’t always legally keep someone else from hunting your public land stand, you can see who is hunting your stand and when. I’ve come to realize people are much less likely to climb into your stand—or try to steal it for that matter—when there is a camera three feet above it. Put a trail camera to work on the properties you hunt to monitor potential thieves.

Want to know the simplest way to prevent treestand theft? Take them down. I know. It isn’t logical to take down a stand every time you climb down. At least, for those heavier 20- to 30-pound stands it doesn’t. But, with high-end, lightweight stands it does make sense. If you have a stand that is 10 pounds or less (and there are several of these options on the market), why not take it with you?

For those that don’t take them down after every sit, at least take them down at times you know you won’t hunt that spot for a while. It’s just one more thing you can do to prevent your belongings from going astray.

As you know, this doesn’t keep your stands from being stolen. But it does help you get them back if they are heisted. Complete this branding step by making a subtle mark on the stand that only you could distinguish. But don’t make it obvious. The first thing thieves will do is conceal obvious markings. That way, you will be able to identify them when no one else can.

Follow these simple steps and you’ll greatly reduce the potential for your stands to be stolen this season. And be sure to give us a shout and let us know any tips you may have for preventing treestand theft in your neck of the woods.