All-new for 2015, the Synergy is the ultimate example of Elite Archery’s dedication to “Shootability.”

Before we get into the specifics of the Synergy, let’s talk about shootability for a minute. Ask a dictionary to define the word and you’re going to have trouble.  Elite created the term shootability to define what sets their bows apart from the competition. Is it a marketing strategy? Sure. But, having shot Elite for years now, I can say that the claims about shootability really do matter.  The shootability of Elite bows have made me a more effective bowhunter. 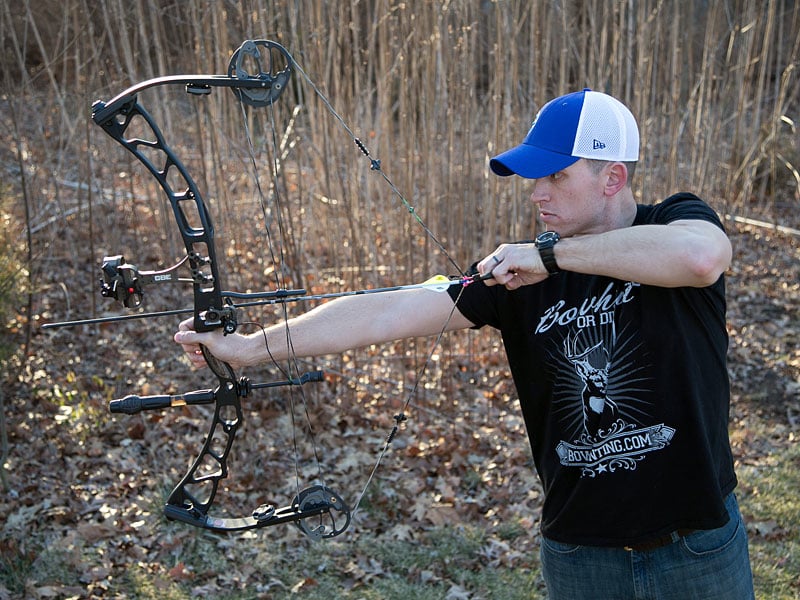 Shootability begins with the bow’s draw cycle. When compared to the competition, the Synergy will hit peak weight later in the draw cycle and spend less time at peak weight throughout the cycle. So if you’re shooting a 60-pound bow, you won’t be pulling 60-pounds right when you begin to draw, and you won’t be pulling 60-pounds for a very long time as you draw. Pound-for-pound, the Synergy is one of the easiest bows to draw – a fact that matters a great deal when you’ve been sitting in your treestand for hours upon hours in the cold and.

Shootability doesn’t stop when you reach full-draw. Elite bows have an incredibly solid “back wall” thanks to dual limb stops. This solid back wall helps shooters use consistent and repeatable shooting form and anchor points which leads to consistency and accuracy downrange. Elite bows also have less holding weight at full-draw, as well as a generous “dwell zone”. Put simply, Elite bows are easier to hold at full-draw while you wait for that buck to take the last step needed before you have a clear shot. And if you do happen to let the string creep forward a little bit, the forgiveness of the “dwell zone” means that the bow isn’t going to try and jump forward out of your hands immediately.

Now that we’ve described what shootability is, and how it helps bowhunters be more successful, you can begin to understand what makes the Synergy such a great bow.

First let’s take a deeper look at the design and features of the Elite Synergy.

The Elite Synergy features a two-track binary cam system. This system slaves the cams together, forcing them to rotate in sync and ensuring that they work together to be as efficient as possible. Historically two-track cam systems could be difficult to tune and maintain, but Elite’s method of linking the cams together has ensured that these issues remain a thing of the past. It is the efficiency of these cams that allow the Synergy to have a ridiculously smooth and easy draw cycle while still providing plenty of speed at 325 IBO. The mirrored top and bottom cams further increase consistency and help ensure straight and level nock travel. That’s a fairly technical point, but the practical benefit is this – consistent and level nock travel makes tuning easier and is an especially important factor for accurate and consistent broadhead flight. I haven’t taken the time to precisely measure the nock travel on my Elite bows but I have seen the tangible benefit of being able to easily setup all of my Elite bows, including the Synergy, to shoot fixed-blade broadheads right with my field points.

The draw-length adjustment of the Elite Synergy is achieved by swapping-out interchangeable modules that fit inside the base cam. Modules are available to allow the Synergy to be set at half-inch draw length increments from 27–31”. Finally, the Synergy’s cams and mods (as well as the rods for the cable guard and string stopper) are finished in Pro Kote, which is a ceramic-based coating that delivers protection against chipping, scratching, and corrosion. Pro Kote also helps to reduce friction among moving parts, which is obviously important for the Synergy’s cams and modules. Finally, Pro Kote finishes look awesome – and they’re completely non-reflective, which eliminates the chance of glare that could spook game in the field.

Take a look at the Synergy’s riser and you’ll quickly notice a unique shape in the upper-half. Elite has named this distinct feature the “Riser Cage”. This cage does more than grab your eye – it adds strength and rigidity to the rise, which helps decrease torque and vibration while also increasing performance. 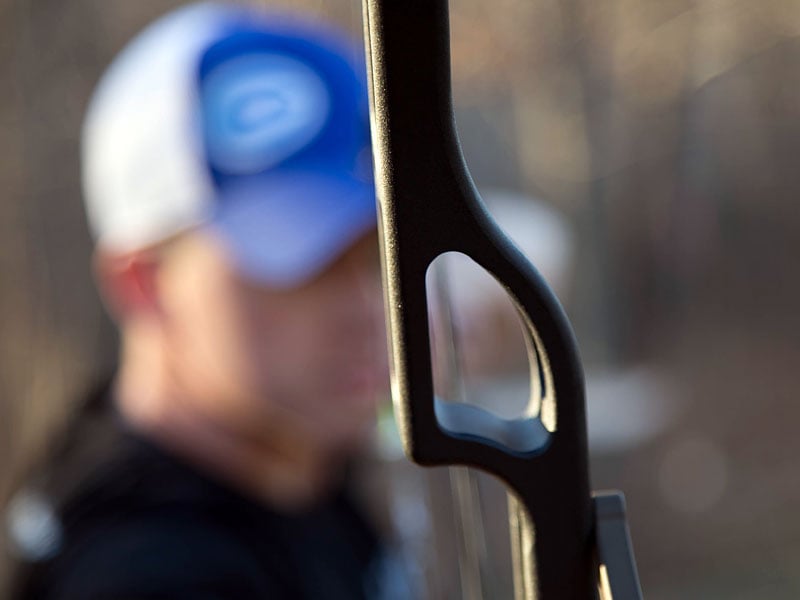 Does the Riser Cage really benefit the bow or is it just a marketing gimmick? To answer that question, all you need to do is ask Elite’s competitors. Since Elite introduced the Riser Cage last year other manufacturers have implemented similar design features in their risers in an attempt to achieve the same benefit that Elite pioneered with the Riser Cage.  Furthermore, scientific testing has proven that the Riser Cage increases the strength of the riser by 30% and stiffness by 19%. And thanks to the unique design these benefits are added without increasing the weight of the bow.

While some manufacturers have gone towards thin, split-limb systems, Elite continues to uses the highest quality three-layer laminated, solid limbs. The stability of these limbs offer repeatability, consistency, and durability – characteristics that the power source of any bow should have. The Synergy is offered with limbs that have a peak weight of 40, 50, 60, 65, 70, and 80 pounds. The geometry of the Synergy’s beyond parallel limbs reduce the bow’s “jump” when the arrow is released. Less than parallel limbs tend to transfer energy forward, which results in the bow that lurching upon the shot. The Synergy’s limbs, however, transfer energy up and down; these opposing forces negate one another and allow the Synergy to have very little movement when a shot is released. Not only is the Synergy free from vibration upon the shot, it is extremely quiet. Thanks to the Synergy’s beyond parallel limbs, Elite is able to use a long riser length while still keeping the overall axle-to-axle length of the bow at a compact, 33.5” size.  A longer riser helps the bow’s stability, especially when it is held at full-draw.  Look at target bows and you’ll see that’s the case.  The Synergy holds so well at full-draw that I often forget I am shooting a compact hunting bow.

Quality in the Details The Elite Synergy comes outfitted with latest vibration-dampening and noise-reducing technology from LimbSaver. On each of the Synergy’s limbs you’ll find a LimbSaver Broadband dampeners.  The strings also feature LimbSaver’s string leeches to help eliminate noise from string oscillation.

Speaking of strings, The Elite Synergy comes equipped with premium Winner’s Choice bowstrings made from BCY-X material. The Winner’s Choice strings not only look great – coming color-matched the color of the bow that your order – they also perform incredibly well. I have been using Winner’s Choice strings for years, and they’ve yet to let me down or require as little as a minor adjustment to correct peep rotation.

For string suppression, the Synergy features an all-new, proprietary rod and dampener that was developed with input from professional archer, Levi Morgan.

Everything we’ve talked about thus far relates to how well the bow shoots, but let’s not kid ourselves – looks matter too. Elite bows feature high-definition, extremely durable camouflage patterns that make traditional “dipped’ camo finishes look like technology that should have stayed in previous decades.  The Synergy is offered in three camouflage patterns – Realtree Xtra, Realtree Max-1, and Realtree AP Snow.  Elite’s “Ninja” black finish is slightly textured, and because of the simplicity of the color you can clearly see all of the time and care that Elite spends machining their risers – the tolerances are tight and the edges are carefully radiused to eliminate sharp edges.  You can also combine any of the camouflage options with the “Ninja” black finish.  For example, a bow that has a black riser and camo limbs is a great option if you hunt from a ground blind and a treestand.

I can’t talk about the benefits of the Elite Synergy without mentioning Elite Archery’s unbeatable warranty. Every Elite bow is covered for it’s lifetime. Period. Even “used” Elite bows are warrantied – a fact that will help you sell your Synergy when it comes time to upgrade to the latest Elite bow in a year…or ten.

If you want a bow that you can control, one that offers the ideal combination of speed and forgiveness, and one that allows you to get to full draw with ease and stay at full draw without concern, then the Elite Synergy should be at the top of your list. But don’t take my word for it, get to your local Elite dealer and take the “Shootability Challenge” to experience the Elite difference for yourself.

Elite Synergy By The Numbers: