Bitter winds tear at your face as you step outside and close the truck door. It’s a cold, blustery day out, and you’re prepped and ready for an afternoon in the deer woods. You look toward the ridge, thinking about all of the deer currently bedded on the slope just west of the cornfield. Thoughts of the big buck on your trail camera sends a shiver down your spine as you turn to grab your gear. It’s almost the late season ladies and gentlemen. Are you ready?

There are four pillars for success when it comes to deer hunting. But come the late season the importance of these four are amplified due to harsh conditions. The first of these is having the right mindset. It can be tough to keep your mind in the right place after a long, hard season. Hunting isn’t easy. It’s tough business and taxing on both mind and body.

The first step is to keep hunting. It is easy to skip out on the woods because you’re too tired or busy. I’ve used that excuse a time or two. Hunting takes effort to be consistently successful. Everyone wants to tag their buck by the rut. But don’t get discouraged if you don’t. Late season hunting is a great time to bag a buck if you didn’t get it done during the rut. Photo by Marty Honeycutt

Keep telling yourself you’ll fill your tag. Furthermore, believe yourself when you do. It is paramount we stay positive in our efforts. It can be hard to swallow coming up empty during the early season and the rut. That said, it happens. The late season is the time for redemption and last-minute success.

The last part of having the right mindset is having a clear understanding of late-season whitetail patterns. It’s crucial to know exactly how to adjust your tactics. But more on that later.

In most states the late season is a brutal time to brave the elements. Severe cold-weather temperatures make it hard to weather the elements for long periods of time or execute a good shot at the moment of truth.  Below are some of the items that I consider must-haves for late season hunting.

Weapon: Most states have bow seasons that run through the end of December and some run into January. Whether using a compound, crossbow or traditional archery equipment the weapon you choose and your effective range will dictate the strategy you implement during the hunt.  Make sure you practice with your weapon of choice before heading into the field.  Additional layers of clothing and sub-zero temperatures can and will affect both the way you, as well as your equipment, perform.

Rangefinder: It is very important to have a rangefinder during the late season, especially if hunting in open areas over food sources.  Guessing yardage in a wooded setting with plenty of landmarks to judge from is one thing.  Guessin accurately when a buck is standing in a cut corn field with nothing between the two of you but air is another.

Optics: If you have a good late-season food source chances are you’ll see deer you never have before. Deer will come from 3, 4 even 5 miles around if you have one of the few good food sources. You’ll need optics to spot deer at a distance and help you determine if any new bucks meet your criteria for filling a tag.

Clothing – and lots of it: It’s important to dress warm which you can do by dressing in layers. But don’t put the extra layers on until you get to the stand. The last thing you want to do is sweat on your walk in.  Once your body cools off from your walk the moisture of your sweat will soon have you shivering and headed back to the truck before prime time.

Boots: Good boots are a must. Personally, for late season Midwestern and Eastern hunts, I wear insulated 800 gram rubber boots. I can wear one pair of socks and keep warm feet from daylight to dark.

HotHands: The next thing I do is carry HotHands, or something similar. I place them in strategically-based locations throughout the body. The first goes on the back of my neck. I place it where the collar tightens so that it doesn’t fall through. I put two more in each jacket pocket so I can keep my hands warm. If you don’t have insulated boots, put one down each boots or use the HotHands feet warmers. Keep extras in the backpack. Trust me, they are worth their weight in gold.

Trail Cameras: Scouting is essential all year, but especially so during the late season.  Determine which food sources you think the deer will be using the most, then let your trail cameras tell you which one is holding the big bucks. Trail cameras are a late-season hunter’s best friend. Place them around food sources to take inventory and see what areas deer are using most.

I begin my late season pursuits by taking inventory. I start this by implementing as much in-the-field scouting as I can. I’ll glass from afar and watch as much food-source ground as I can. The best time to do this is during the afternoon.

The next step is to split your cameras up and put them out on each promising property you have access to. Leave them up for four or five days. Pull the cards and see which property you think will give you the best opportunity to fill your tag. Once you have decided on a location, it’s time to pattern the buck you found. I call it the camera blitz. Post every trail camera you have on the one property you decided on. Place them on trails located around the food source. But pay heed to the wind, be quiet while in the field and don’t invade bedding areas. Standing crops is the best case scenario. A standing bean field adjacent to an east-facing slope (as shown in this photo) is a hot-ticket location come cold weather. Photo by Josh Honeycutt

The more you can cover the better. Check your cameras every four to five days. This method will reveal just how patternable deer are and will give you the Intel you need to pick a stand location without risking bumping him.

Hang stands for two or three different wind directions in the most likely spots to run into the deer you are after. Be extremely quiet and non-intrusive during this process. Deer bed very close to food sources during the winter. In fact, early-season stands are often very effective again during the late season. Once you have hung your stands, it’s up to Mother Nature.

I know what you are saying, that’s almost two weeks that you won’t get to hunt. Not so. During this week-and-a-half scouting process, I’ll still hunt. The best thing to do is hang a stand that puts you in the action and allows you to scout from afar as well. Most hunters refer to this as an observation stand.

Now it’s time to hunt. What provokes deer movement, is change. More specifically, change in weather. Deer are jittery, nervous, fickle creatures. They don’t like change. That is why a change in weather will cause a flurry of feeding action — regardless of what type of weather change it is.

The next “window” is exactly the opposite. Warm-ups are also great times to hunt. What this means is that it doesn’t have to be cold to see deer. 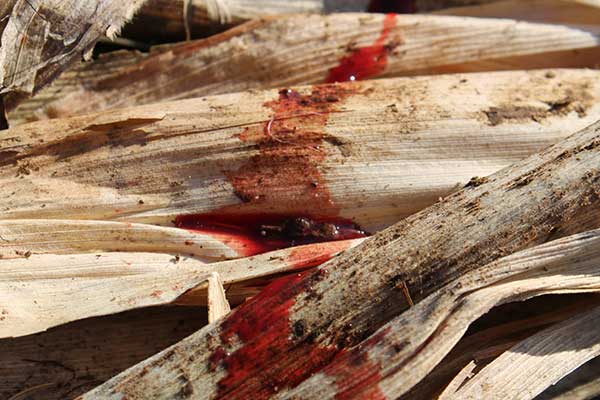 There is still time to get out there and arrow a deer. Put your time in and maybe you will be blood-trailing a buck during the late season. Photo by Josh Honeycutt

Those are the three best times to take advantage of deer movement. Here’s the sad part of the story — you aren’t going to always see deer, or mature bucks. And when you do see them, they won’t always enter the food source in the same location or at the same time. That’s why, as a bowhunter, you have to put your time in.

Hunting afternoons, on high-odds days, in an area you know holds deer, will offer you your best chance at a filled tag. The late season is a great time to hunt. Play your cards right and you just might fill your tag on a late-season giant.

Josh Honeycutt
Josh Honeycutt is an avid deer hunter. He's hunted whitetails from South Carolina to South Dakota but spends most of his time hunting in Kentucky. Honeycutt has written and created other forms of media for more than 60 media companies in the outdoor industry, including: North American Whitetail, Whitetail Journal, Field & Stream, Outdoor Life, Deer & Deer Hunting, Rack Magazine, Inside Archery, Game & Fish, Fur-Fish-Game, and others. He's also very active in digital content, specializing in writing, editing, photography, videography, podcasting, and more. You can see how his deer season unfolds each year on Midwest Whitetail and Chasing November.
Post a Comment View 1 Comment
Post a Comment
Login with Facebook
Login with Google
Post as Guest
Cancel reply
You may also like: Gearing Up For Late Season Bowhunting
May 1st, 2015