Although it is often discussed in the archery and bowhunting world, kinetic energy is not at all specific to bows and arrows.  Kinetic energy is a concept of physics – a way to quantify the energy that an object possesses due to motion.

The formula for doing so is: KE = (m*v2)/450,800.  The m in this formula represents mass (weight), the v represents velocity (speed), and the outcome of the formula is rated in “foot pounds” (ft. lbs.) of kinetic energy.  In English, this formula states that…

For example, let’s say that we have a bow that shoots a 400 grain hunting arrow at 297 feet-per-second.  The kinetic energy of this setup would be calculated by taking the arrow weight of 400, multiplying that by the speed of 297-squared, and dividing the result of that multiplication by 450,800 – which tells us that this bow and arrow setup produces 78 ft. lbs of kinetic energy.

The formula for calculating kinetic energy reveals that there are two primary variables – mass and velocity, or in archery terms – arrow weight and arrow speed.

Kinetic energy is increased when either of these two variables are increased, but bowhunters know that both arrow weight and arrow speed cannot be increased simultaneously when other aspects of the bow setup remain the same.

One cannot increase arrow weight and arrow velocity, unless they are changing the energy output of the bow by increasing draw weight or draw length.

The current trend in bowhunting has been to focus on speed, but testing the kinetic energy formula with real-life data will prove that, if kinetic energy is the goal, then increasing mass (arrow weight) is more effective than increasing velocity (arrow speed).

In fact, when comparing realistic bow and arrow hunting setups, it has been found that increasing arrow weight will not diminish kinetic energy, even when the arrow’s velocity slows significantly.

A heavier arrow will be able to absorb more of the energy from the bow and convert it into kinetic energy down range, and because the arrow takes more energy out of the bow, there is less noise and vibration of the bow upon release.

It is also important to remember that kinetic energy remains constant only when the mass and velocity remain constant.  Obviously an arrow’s weight doesn’t change when shot, but the arrow’s speed most definitely changes as it travels.

Natural forces, such as air resistance, begin to slow an arrow as it travels downrange.  But the greater the mass of an object in motion, the more force is required to slow down that object.  Therefore, a heavier arrow will not only receive more energy from the bow, it will retain more energy down range, because it is less susceptible to outside forces and resistance.

Obviously, any imbalanced extremes of arrow speed and arrow weight should be avoided, and there is a point of diminishing returns when increasing speed or weight at the expense of the other.

Shot placement, broadhead design, and a myriad of other factors are important to consider when talking about the hunting effectiveness of an arrow delivered from a bow, but kinetic energy is an important part of the equation.

There are common recommendations for what constitutes an effective level of kinetic energy when bowhunting various types of animals.  For example, Easton is one of many sources that make the following recommendation.

Mark Huelsing
I am a husband to one very patient and understanding woman, a father to two amazing kids, a hunter, an explorer, a wanderer, a thinker and a writer. You can follow Mark's adventures at soleadventure.com
View 6 Comments
Post a Comment
Login with Facebook
Login with Google
Login To Account
Cancel reply
Other Articles 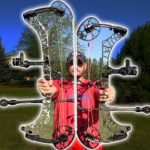