When I lived in Nebraska, I was fortunate enough to have permission to hunt my family farm. Then I moved to Iowa, where I currently live, and hunt on approximately 40 acres. These two pieces have always been plenty for me. And until this year, asking permission to hunt other pieces of ground never crossed my mind.

This spring, the area I live saw record-breaking flooding. At its worst, I had over 6.5ft of water in my barn. To put it into perspective, I kayaked over my 6ft chain-link pasture fence. It took weeks for the water to recede and then a second round came through that flooded my barn with over 3ft of water. The effects on the deer herd I had been working hard to build the last four years were seen almost immediately. Overall deer sign, the number of pictures on camera, number of sightings on scouting sits all diminished substantially. I went from 5-10 deer in my backyard nightly to seeing 1-2 a couple times a week. Once I realized how big of an impact the flooding had and how big of an impact it would continue to have (the fields are still under water and no crops were able to be planted on the adjoining properties) I knew I needed to do something to ensure I had additional places to hunt. Zastrow with her buck from the 2018 season.

I really did not know where to start. I started reading several articles and reviewed numerous social media posts on tactics to approach landowners to ask for permission. Many of these had a lot of good tips, but as someone who lives in the country that had an intruder break into their house while they were home, I personally did not feel right knocking on a stranger’s doors. I chewed on all the information and strategies and started to think I may have to get over my fear of approaching houses. But I had a breakthrough after talking with one of my friends – I could write letters! I felt this would allow me to convey the same message and ask the same question as I would in person, but be slightly less intrusive.

Once I decided I would go this route, I got to work scouting onX maps to try and determine which landowners to send requests to. I analyzed topography, water sources, proximity to ag fields, distance from major roads, etc. and compiled a list of 30 parcels that appeared to be solid areas for deer habitat. I saved all the landowner information and parcel coordinates in an Excel file that I would use in my final Mail Merge.

After I had my list of landowners to contact, the final step was to draft my letter. After reading letter templates online and adding my own flare, I established the following outline:

–          Brief introduction and a few generic pieces of information about myself (what town I live in, what I do for work, etc.)

–          The primary reason for the letter: the opportunity to discuss the chance to bowhunt on their property.

–          Explaining that, although I did not have money for a cash lease, I would be more than willing to offer up my time to help           around their property (chores, planting, picking, clearing brush, etc.)

–          Overview of how long I have been hunting and what conservation means to me.

–          An offer to provide legal documentation to protect the landowner in the rare chance a mishap would occur.

–          Reiteration of ensuring I would respect any rules they put out and that I would treat their property with the upmost care and  respect.

–          An offer to meet and discuss in person to talk through any questions or concerns.

Once I finalized my letter, I utilized the Mail Merge function in Microsoft Word to populate the landowner name and parcel information and off to the printer they went. I addressed each envelope by hand and added an ink signature to each letter for a personal touch.

Out of the 30 letters I sent, I received correspondence back from 15 landowners; 7 of whom offered me permission. Overall feedback I received included the landowners liked the letters as it gave them more time to think on it as they were not caught off guard, they had more time to determine what questions they would have and how to ask them, and overall they felt it was far less intrusive then showing up on their doorstep. In addition, these letters have been a great way to network. I had one individual who was not able to allow me to hunt their property, but put me in contact with one of their friends who had a parcel in the area and I now have sets hung out there.

I don’t know what this season will bring and am still hopeful the deer return to my property, but I am thankful for the connections I have established through writing letters and plan to use this tactic in the future.

What about you? What have you found to be the best way to gain permission to hunt on private land? Comment below and let us know what works for you.

Lindsey Zastrow
Lindsey Zastrow lives in Southwest Iowa where she works as a Senior Analyst at a stock brokerage firm. Outside of work, she spends her time in the woods bowhunting or on the water. She lives for fall and works year round on her property to enhance the whitetail habitat.
View 8 Comments
Post a Comment
Login with Facebook
Login with Google
Login To Account
Cancel reply
You may also like: 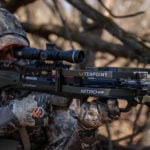