If you’ve ever had your hands on a velvet buck, you know that feeling is truly unique. I have always had a dream of one day harvesting a velvet buck and in 2014 I made that dream a reality. There are a few states that offer good opportunities to harvest a velvet buck, but timing is critical in all of them. I will tell you a little about my story later, but for now here are the six best states to kill a velvet buck this season. 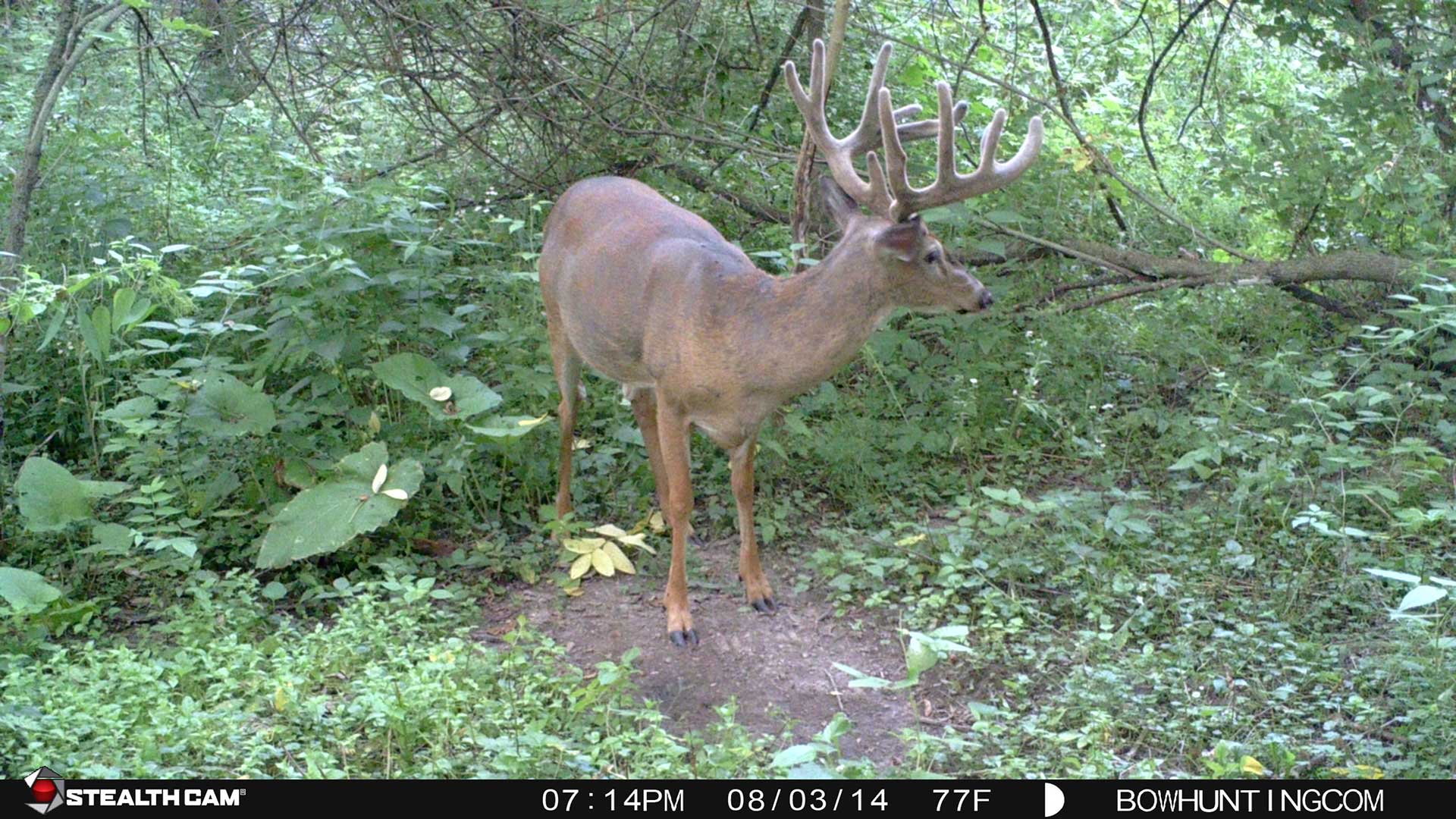 Sooner or later every serious bowhunter will find themselves longing to punch their tag on an early season velvet buck.

More and more mature bucks are being shot in Kentucky in recent years and with an abundance of public land open to hunting, you could have a shot at your own Kentucky velvet whitetail buck. Archery season opens the first Saturday in September. If that Saturday falls close to the first of the month, you have a good shot at a velvet buck. This year’s opener falls on September 5th. In Kentucky, non-resident hunters must purchase an annual hunting license ($140) and a non-resident deer permit ($120). Not too bad considering some of the other state prices. Licenses can be purchased over the counter or online. There are plenty of public land options available, but if you are serious about tagging a big velvet buck, you better get to where the pressure is minimal. The terrain can be steep and hard to navigate, but if you’re willing to get off the road a fair distance, you should have a good opportunity to see some decent bucks.

The Evergreen State is often overlooked for its whitetail hunting. Most hunters are focused on elk or mule deer so the whitetail population is on the rise. With large river bottoms and irrigated cropland, the quantity and quality of the whitetail population is impressive. The archery season opens on September 1st, which presents a great opportunity at getting a shot on a velvet buck. One drawback to chasing velvet bucks in Washington is the license price. At a whopping $434.30 for a non-resident deer tag, it ranks as one of the higher priced states in my list. Licenses can be purchased over the counter or online. There isn’t exactly an abundance of public land, so finding hunting property might be a bit of a challenge. That being said, there are numerous apple orchards along the river bottoms with owners that would love to have hunters help them control the local deer herd. Access onto private property might be easier for non-resident hunters than most states offer. You’ll have to strike quick if you want to shoot a buck in velvet. Matt Alwine of Chewelah, WA shot this 153″ buck on September 3rd as the velvet was coming off.

It’s no secret that Wyoming offers some great whitetail hunting. With a season that opens on September 1st, Wyoming also offers an opportunity to bag a velvet buck. A state that is typically looked at for elk or mule deer hunting has seen whitetail hunting gain popularity in recent years. The northeastern part of Wyoming hosts a plentiful deer herd. In order to obtain a whitetail tag in Wyoming, you must apply between January 1st and March 15th. A non-resident hunter can apply online and if successful, the license fee is $338.50. Odds of drawing a lottery tag are pretty good. You are most likely going to have to gain permission from local ranchers to access quality hunting ground. The deer like to bed in the cottonwood groves and make their trek to the irrigated alfalfa fields to feed. If you find a large area of cottonwood covered bedding ground, chances are real good you are going to see a significant number of deer. During the first week in September, the temperatures can be approaching 100 degrees. If you can locate a tree row along a travel route and endure the temperatures, you might be in for a lengthy parade of whitetail activity. Bowhunting the wide open spaces of Wyoming has grown in popularity for whitetail hunters with an abundance of velvet bucks dotting the landscape.

Montana is known for incredible whitetail hunting along the Milk River and the Powder River. These lowland areas offer water, shelter and food. Look to the southeastern area of the state for less popular hunting opportunities. Archery season opens September 1st in the Big Sky State which presents a chance at a velvet whitetail. Like Wyoming, Montana requires a lottery draw for their deer tags. You can apply online from January 1st through March 15th. A few years ago, Montana raised prices on all of their non-resident tags. A non-resident archery deer (whitetail or mule deer) tag will set you back $552. This makes Montana the most expensive state on our list. Montana was hit hard by EHD in recent years, but there are areas of the state that were less affected and still maintain good deer populations. Look for cottonwood groves in the river bottoms with alfalfa fields nearby. Glassing for big velvet bucks is quite common in late summer and with a strategically placed stand, you will find yourself glassing as the late afternoon sun sets. It’s not uncommon to see fifty deer in one sit. Dress for the heat and hold out for the big bucks that usually don’t show until just before dark.

A state more known for its waterfowl hunting is also growing some serious whitetails. The key to North Dakota is the archery season opening date. It’s always the Friday closest to September 1st. In 2014, the archery season opened on August 29th which makes it one of the earliest opening dates on the list. This gives you even more of an opportunity to tag that velvet buck. Pricing for licenses in North Dakota is reasonable for non-resident hunters. With the deer tag and habitat certificate, your total cost for a non-resident whitetail archery tag is $272. You can purchase licenses over the counter or online. North Dakota has a plethora of public hunting ground. It also offers what is known as PLOTS: Private Land Open to Sportsmen. Private landowners allow access onto their properties for hunting purposes. Most local residents covet the rifle buck tags, so the archery pressure is fairly low. The terrain can be wide open with little to no tree cover. Look for abandoned farmsteads, shelter belts, or water sources. These areas will surprise you with the number and quality of deer they hold. Definitely consider North Dakota when deciding where to chase velvet bucks. Do your homework for velvet bucks. Run trail cameras and do lots of glassing. And when you find a buck still in velvet, you better make your move quick.

You’ll rarely hear much about big buck hunting in the state of South Carolina, but just browse through some photos online and you’ll see that South Carolina can be somewhat of a sleeper when it comes to big velvet bucks. In certain Game Zones hunters can begin hunting as early as August 15th. Find the right private land access and you’ll be on the right track for punching one of the earliest tags of the year. Just be sure to bring your ThermaCELL. South Carolina mosquitos can be as bad as anywhere in the country. Be prepared! Hunting in South Carolina is affordable with a 10-day deer tag ringing up less than $200.

All six of these states offer a good chance to bag a velvet buck. The timing of the opening date is critical for ensuring the bucks are still carrying their velvet. Most whitetails will shed their velvet that first week in September. Every so often, you will see a velvet buck shot as late as September 15th, but that’s definitely a rare occasion. Last fall, I was lucky enough to find myself in North Dakota for an early season archery hunt. Other commitments kept me from hunting the first week of the season, but I was able to get out the evening of September 4th. That first evening, I saw a pair of young bucks. One was still carrying his velvet and one was completely cleaned off. I knew I didn’t have much time and would need to take whatever shot opportunity I had. On the evening of September 6th, I had a group of three bucks feeding in a soybean field a couple hundred yards away. As the light faded, the bucks made their way toward my ground blind. One of the bucks stopped in a small patch of brush not far from me and thrashed his head around until his velvet was completely cleaned off. Another buck who still had his velvet made his way past my ground blind, and I was fortunate to harvest my first ever velvet buck!

The author with his North Dakota velvet trophy.

If you are serious about getting your hands on a velvet buck, put in the time and do your research, decide what state you want to hunt, and be on stand opening day. A big velvet buck is a true trophy that every bowhunter should set his or her sights on, at least once!

Travis Lange
Architect / Project Manager at Benike Construction
Travis has been bowhunting various states for more than 25 years. He is an Architect / Project Manager for Benike Construction in southeastern Minnesota. In his free time, he enjoys writing about hunting and various outdoor activities. Travis lives in Saint Charles, Minnesota with his wife and three children.
View 3 Comments
Post a Comment
Login with Facebook
Login with Google
Login To Account
Cancel reply
You may also like: